From The Sails: Light Years

From the Sails: Light Years was a spectacular celebration of Australia’s iconic Sydney Opera House through stunning light projection and an immersive live-sync soundscape.

Art Processors created an original film artwork, projected across the recognisable “sails” of the western facade, that traversed the House’s history and legacy as a performance venue, public building and World Heritage-listed masterpiece.

It was a magical experience that used our innovative live audio-visual synchronisation technology to envelop audiences in the musical narrative and storytelling—without having to download an app. With one scan of a QR code, anyone watching the spectacle could listen to the soundtrack on their own device wherever they were—across the Harbour, on the water or at a local venue.

Created for the 50th anniversary of the Sydney Opera House and projected onto the sails during October 2022, it was a visually joyous celebration of the history and people of this extroardinary performance venue.

Sydney Opera House commissioned our Group Director, Creative Services Sam Doust, to create a film and sound experience that captured the history of the building. It was to be the launching event for a year-long program of celebrations.

They wanted to tell the story of the Opera House’s creation as well as the people who brought it into reality and filled its spaces with performance of all forms. From the earliest stories of the First Nations owners to its ongoing contribution to the Sydney community, the challenge was to capture the spirit of a place that is central to the Australian cultural landscape.

As a recognised subject-matter-expert on the history of the Sydney Opera House—not to mention an award-winning motion artist—Sam was uniquely placed to create a spectacular event that translated the wealth of stories into an artwork spoke to all audiences.

Added to that, it would be the first time the House was telling its own story through the popular “Lighting of the Sails”, but also the first time the projections were being accompanied by live synchronised audio that could be accessed by anyone, anywhere, online.

We worked in close collaboration with the Sydney Opera House team with a clear understanding that together we were creating an artwork that would be far more than just a timeline of events.

Bringing an artistic and curatorial lens to the project, we emphasised significant moments across the past 50 years but with elements of delight and abstraction that spoke to a creative future for the Australian community.

Choosing which performances to feature proved to be one of the most complex challenges. We made sure the film encompassed a diversity of artists and eras, whilst also bringing the footage and images together in a sequence that would flow seamlessly across the Sails.

We collaborated with artist Jake Duczynski of Studio Gilay to create the opening, Wéllema Tubowgule, in celebration of the traditional custodians of the land and its significance as a meeting place. We also collaborated with CG artist Jason Poley and composers Hylton Mowday and Andrew Stevenson of We Love Jam to create an original score for the work.

To enable anyone, anywhere, to listen to the score while watching the performance on the Sails, we adapted our live audio-visual synchronisation technology to work over the web. Our goal was to create a low-friction experience that was device-agnostic and scalable, with extremely minimal latency and water-tight security. 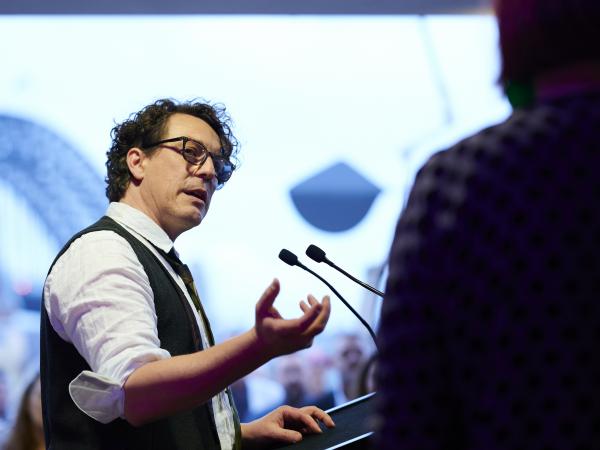 The film is based on a circular sense of time—it loops and doesn't start or finish. This is an acknowledgement of the history of the land the Opera House is resting on, Tubowgule, which has been a First Nations meeting point since time immemorial. It says this House was chosen to be on this incredible place.

Picture: Sam giving an interview to Fiona Winning, Sydney Opera House Director of Programming, during the launch event for From The Sail: Light Years.

The result was an epic 17 minute storyline in a continuous loop beginning and returning to a reflection on the land on which Sydney Opera House is situated, Tubowgule. It was a statement that said “this a special place”.

There was no need for audiences to download an app—all they needed to do was pull out their phone, scan a QR code, and our beautifully-designed web player synchronised with the live performance to deliver the score.

Audiences could choose how and when they encountered the film—people could take it in at any moment during the two weeks that it lit up the night skyline of the Sydney Opera House roof. The live synchronised soundtrack offered the chance for personal immersion as viewers took in the changing images across the Sails, or a shared moment of entertainment with others.

The film was also a celebration of the diversity of people who have breathed life into the iconic building. From those who undertook to raise the building into reality—Jørn Utzon, Ove Arup and Peter Hall—to the welders, carpenters, engineers and construction workers, the artists on its stages and the many creators backstage.

It explored the House’s construction and opening in 1973, before celebrating its legacy as a performing arts venue and the countless events that have brought the community together for half a century.

Adding to the tech experience for the Opera House team, there was no limit to the number of people who could listen to the soundscape in real-time and latency was barely noticeable—we were asked to deliver latency of less than 500 milliseconds but the result was less than 45 milliseconds, ensuring this future-proof tech can be used again for any future projections that require lip syncing.

To extend the audio element of the sails projection to the whole harbour has been a great endeavour. Anyone who can see the sails can now listen to the soundtrack perfectly synchronised. This supports a broader audience, and enhances immersion and a sense of belonging. I hope we can continue to evolve this solution for the needs of future projections and lighting the Sails, whatever they may be.