Waiting game: How we killed off queues at Mona

Many of us experience multiple queues every day, whether it’s at an airport, on Mt Everest, or in a museum. When lines move quickly, they’re soon forgotten. But a slow queue can seem to last forever.

What separates a good queueing experience from a bad one, however, isn’t just the speed of the line. How we feel while waiting — expectations, uncertainty, boredom and frustration, not to mention anger when someone skips ahead — can impact not just our perception of the queue, but also our perception of what we see at the front of the line.

This was a problem we solved at Hobart’s Museum of Old and New Art (Mona) where we implemented world-first virtual queueing technology that over a one-year period, saved visitors 1,798 days of standing in line.

Visitor data was showing people who were waiting up to an hour to view a special exhibit were more likely to “hate” it. When we removed the physical queue, replacing it with our virtual queueing system, and reducing wait times to less than 5 minutes, there was a dramatic shift in the overall visitor perception of the exhibit.

While waiting time can be hard to cut down, perception can be altered with good line design, management, and a human-centred digital approach that empowers both the staff managing the queues and the people waiting in line.

Mona collects visitor data via The O, a digital platform we built that is core to the museum’s experience, and also its day-to-day management. In addition to replacing wall texts and allowing visitors to save their visits, it asks them whether they “love” or “hate” the works on display.

When Mona first opened in 2011 the Love/Hate functionality in The O was incredibly disarming for visitors. David Walsh, Mona’s owner, wanted to viscerally provoke visitors and force them to have opinions about his provocative collection.

Everyone loves bit.fall, a two-storey waterfall that spells out words streamed from real-time Google searches on the descent. Inversely, for a time everyone hated Mummy and Coffin of Pausiris, a man who lived and died in Egypt some 2000 years ago. From January 2011 when Mona opened to August 2017, 32% of visitors hated this permanent exhibit.

During peak times, visitors had to wait up to an hour to see the Mummy, with lines 20-people deep. Only 1-2 people were permitted to enter the exhibit at a time, usually spending 2-7 minutes inside. Often, visitors would join the line not knowing what they were queueing for. They would wait so long, get inside, and then think, “is this it?”

It was clear from the visitor data that people hated the exhibit because they hated waiting in line.

Removing physical queues with The Queuer

Things changed in early 2018 when we replaced physical queues at the museum and began trialing The Queuer, our virtual queueing technology. In the lead up to the opening of James Turrell’s light installations that year, and knowing the American artist would be popular, we added The Queuer to The O.

Now, when a visitor wants to see a special exhibit, they can join a virtual queue via The O and continue exploring the museum. When they reach the front of the queue, they receive a notification and are given a generous 30-minute window during which they can make their way to the exhibit. When they arrive, they are ushered inside within 5 minutes.

Not long after we implemented The Queuer at Mona, curatorial staff noticed a big shift in the Mummy’s popularity. Removing the physical queue for the exhibit meant visitors no longer had to wait so long to see it, were more engaged while viewing it, had a deeper understanding of what they were seeing, and were less likely to “hate” it.

Ultimately, we were able to change how visitors perceive the artwork through the delivery of a virtual queueing experience that blends digital and physical spaces. 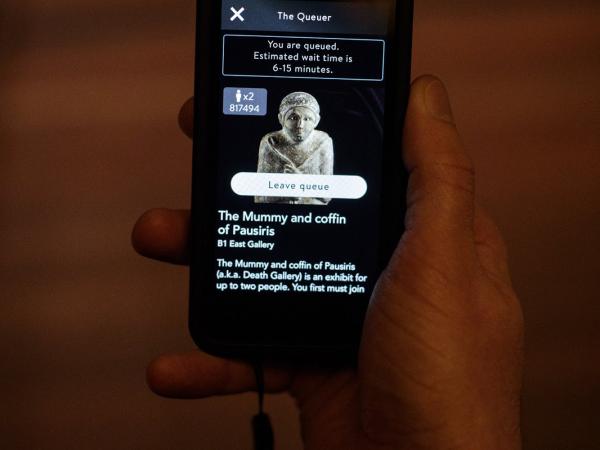 But here’s where it really gets interesting. The Queuer doesn’t just dole out consecutive numbers to visitors when they join a queue — it’s location-aware and elastic, thanks to our indoor positioning technology.

When someone joins a queue, the system provides an estimated wait time, taking into account their location and distance from the exhibit, and then places them in the virtual queue, taking into account their subsequent movements — whether they are a long way from the exhibit, within a 2-minute walk, or at the exhibit. If a visitor is a long way away, the system will summon other visitors who are close by, essentially letting them jump ahead in the queue, allowing other visitors to continue exploring the museum in their own time until it’s the optimal time for them to see the exhibit too.

What’s more, when a visitor stops at the Museum Cafe or one of Mona’s bars, The Queuer takes into account that they’ve stopped to enjoy food or a drink, and only notifies them of their turn to see an exhibit when they’re resumed exploring the museum.

Visitors engagement numbers point to the real impact The Queuer has had on the overall experience at Mona. In one year, from 15 February 2018 to 14 February 2019:

Designing The Queuer required a human-centred approach that empowered front of house staff and visitors. It also had to account for human chaos — humans never do what you expect them to do — so the system had to be flexible, giving FoH staff control over queues.

In developing the system, we had several goals in mind:

We didn’t want to automate The Queuer to the point where we’d take away from the jobs of FoH staff members. They are essential to the day-to-day running of Mona and we wanted to make their jobs easier. The queueing system we implemented allows them to:

The queueing system also takes into account the museum’s closing time and knows when visitors aren’t going to make it to an exhibit in time when they attempt to join a queue late in the day. It automatically closes the queue to visitors who are too far away, naturally tapering off queues before 5pm. This has helped reduce frustration for both visitors and FoH staff at closing time.

The Queuer has become a critical tool for FoH staff. By all accounts, they love that they no longer have to deal with physical queues.

The Queuer was the first virtual queueing technology of its kind, and it’s a system we continue to improve and build on in close collaboration with Mona.

It’s become clear the more we add to it, the more that’s competing for a visitor’s time. For instance, when a visitor is summoned to an exhibit, we need to make sure they’re not already at another exhibit. Beyond that, there are other activities on-site the system will need to account for in the future, such as when a visitor’s ferry might leave or when they might have a restaurant booking.

It’s fascinating stuff and we can see the next steps for this technology. It’s about curating the visitor’s entire journey in and around the museum’s spaces to further elevate their experience and engagement.

Images courtesy of the Museum of Old and New Art.