Revealing the secrets behind the Australian Signals Directorate

Throughout a new exhibition at the National Museum of Australia, visitors actively uncover never-before-told stories of the Australian Signals Directorate. Declassified information, released to engage citizens on the cyber and foreign signals intelligence agency’s 75th anniversary, is concealed and revealed using sensors, lights, code words and a mobile experience. Art Processors delivered the full end-to-end experience and there’s no doubt it’s a dramatic, dynamic experience immersing visitors into the life of spies.

Ever wondered what could be hidden in your back garden? There’s a story of a child in the 1950s digging in his family’s yard in the suburbs of Brisbane when he comes across what looks like coins. They turn out to be a stash of identity discs for secret agents stationed at a nearby decoding station. From cleaners and cooks to senior World War II figures, the discs were supposed to be destroyed to protect identities—yet turned up in an average family home.

And do you really know your next door neighbour? Where some intelligence heroes are lauded publicly for their successes, what about spies who can’t be celebrated due to operational secrecy?

At the National Museum of Australia’s new exhibition, Decoded: 75 Years of the Australian Signals Directorate, visitors hear from an operative about the day he was awarded the Australian Intelligence Medal—behind closed doors. The unearthed identity discs and the stories behind their owners are also laid bare.

These two stories show how the work of the Australian Signals Directorate (ASD) may seem far away from our everyday lives but it’s closer than you imagine. 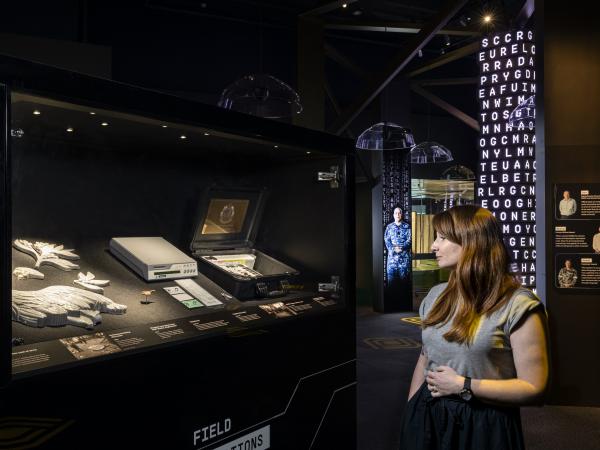 Today, that’s more true than never. For the first time, the agency is working not just with the military and government but directly with individuals and businesses to counter cyber threats. “It's amazing that you can call this top secret organisation for advice because your emails have been hacked,” says Kate Chmiel, Senior Content Developer at Art Processors.

And that’s not citizens’ only personal connection to the ASD: we’re constantly making their lives harder! When the agency began, operatives were listening to and cracking codes of specialist military signals. Now all of us are making signals all the time—constantly pinging from our smartphones, watches, key fobs, medical devices, 3G, 4G, 5G... “It’s a cacophony of sound,” explains Kate, “and with so much of it being encrypted, even my dinner plans, how can the agency focus on what to decode?”

This is the idea that bookends the just-launched exhibition about the achievements of the ASD at the National Museum of Australia. It starts with displays of early 20th Century code cracking equipment, such as Enigma and Typex machines. Then at the exit, visitors walk into an immersive, dynamic representation of the rising cacophony of signals. The walls are covered in screens and mirrors full of the well-recognised visual language of spectrograms, representing how signal levels have increased uncontrollably throughout history. 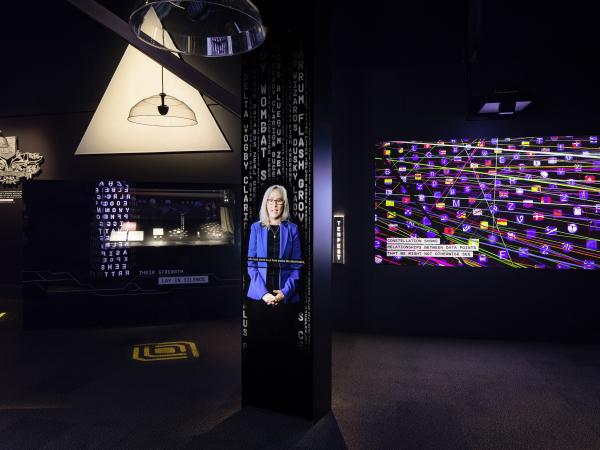 Art Processors undertook end-to-end development for the exhibition, from the design and build to content development and software production. Our exhibition designers, developers, creative technologists, visual designers, creative directors, content developers, project managers, and software engineers have all been involved. “In the concept phase, we worked together to look at the whole experience very holistically, taking into account the entire visitor journey,” says Jamie Houge, Art Processors Project Director.

The concept and content have been shaped by the organisation’s motto: ‘Reveal their secrets. Protect our own.’ “To match that vision,” says Jamie, “we wanted to create a process of investigation, discovery and decoding.” That’s why the exhibition is far from a simple explanatory exploration of the history of the ASD. In fact, everything is interactive and immersive. It’s almost as if you’re involved in the agency’s work yourself as visitors actively reveal every piece of information.

“It's very subtle,” says Jamie. “Move your body or step into a symbol projected on the floor and it activates audio narratives and videos, or lights up objects displayed within darkened showcases.” “And it's theatrical,” adds Jax Plumley, Art Processors Senior Exhibition Designer. “When you intercept, content comes alive.”

There’s also a mobile layer to everything which, again, has to be activated by visitors. Real-life mission codewords like ‘Leotard Lobster’ are hidden throughout the space in lights and signs. If visitors want to know more about collecting intelligence on foreign adversaries and keeping secrets safe, they ‘decode’ one of the words by scanning it with their smartphone. This reveals additional enrichment to each story, such as facts and photographs. ‘’It's been created on a web browser so there’s nothing to download and away you go,” says Jamie. “It’s a really accessible way to get around using the device in your pocket.” 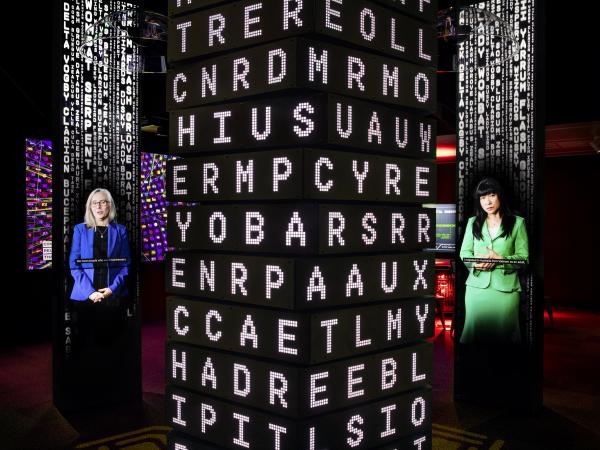 Walk into the gallery and you are immediately in the spy world, gaining entrance through a glowing red-to-green air-lock. The immersion continues throughout. Primarily black, the visual language is monochromatic with traffic light colours adding pops of emphasis. The experience isn’t dark though. Breaking down the divide between the public and the agency was a key aim, “so we didn’t want it to feel scary and otherworldly,” explains Jax. “It’s mysterious rather than intimidating.”

The deliberate aesthetic is about both content and control. “We didn’t want people to walk in and see everything at once, like you might if the gallery was bright and painted white,” says Jax. “The colour palette and lighting draw visitors’ attention to objects and information at the right moments as they move through the gallery and uncover content.”

From the ASD’s origins in World War II, through the Cold War, Five Eyes partnership, 9/11, and current cyber challenges, a lot of information is packed into a small space. The perimeter showcases the history of the ASD. Further in, five multimedia-rich pillars create a pentagon-shaped satellite structure, with a nod to Five Eyes. At the heart stands an impressive, unmissable, ceiling-height digital cipher wheel with codewords trickling down. This clear set up and colour scheme mean that people can create their own route around the gallery without missing vital information.

To further immerse people in the world of the ASD, Art Processors created a multiplayer game from scratch. We did everything from ideation to testing, to constructing the logic and UI, to installing the exhibition components.

Two to five people collaborate on touchscreens, working against the clock to resolve missions based on real events—such as saving Australia's missile defence system plans and preventing a ransomware attack on a hospital. “The stakes feel really high,” says Jamie, “because the situations are realistic and many lives are at risk.” Full of impressive cutscenes and projected onto a large screen, it is proving an enthralling way to place visitors in the shoes of operatives making life-and-death decisions.

“We wanted to create an accessible way of conveying a sense of the complexity of the intelligence work,” continues Jamie, “but we also had to keep in mind the diversity of visitors. We’re talking about everyone from highly knowledgeable intelligence agents to regular museumgoers with little prior understanding of the ASD. So the game is really accurate and incorporates details and jargon for the experts, but it works for everyone else, too, by involving them in an action-packed story.”

Seventy-five years in and the Australian Signals Directorate is ready to celebrate its achievements. But that’s not always easy. We had to be meticulous in not revealing classified information. “Naturally, there's lots of sign off and checks with everything,” says Jamie, ”but the challenge was to make sure we still made each story really rich.”

We knew real life stories would be pivotal to bringing to life the whole exhibition and were lucky to have access to 12 people who worked or had worked in various different positions at the ASD. They spoke on camera for the first time, and two were audio recorded, all discussing what it’s truly like to be an operative.

Conscious of presenting content as genuinely and transparently as possible, we sometimes had to lean into the fact that some information can’t be revealed. “There is a moment we kept in the video edit,” Jamie explains, “where an interviewee says, ‘Oh, I'd like to talk about that but I can't.’ It sparks curiosity of course but what it really demonstrates is quite how privileged the exhibition information is.”

“Operatives are so used to being behind the scenes but all the interviewees revealed who they are as well as what they do, which is so important in engaging storytelling,” says Kate, who carried out many of the interviews. She was particularly blown away by the work of an operative named Janet. “She was extraordinary, starting out at GCHQ learning her craft from people who worked with Alan Turing and ultimately becoming the first female ASD executive. She did all kinds of cool stuff, loads of which she can't talk about.”

Just think… Janet could be your next door neighbour. After all, we’re never far from the amazing and fascinating work of the ASD. It’s been a privilege to shine a light on its history and offer a glimpse into its future.

Images courtesy of the National Museum of Australia. Design by Art Processors.