Summer at Hobart’s Museum of Old and New Art (Mona) is always busy, and the most recent one was no exception. Despite large crowds — more than double usual attendance — there was one common holiday frustration visitors didn’t have to deal with: waiting in line.

Thanks to queuing technology Art Processors has developed in collaboration with Mona, visitors can join virtual queues for special exhibits. Using The O, a location-aware app that’s a core part of the museum experience, visitors can “line up” and receive a notification when it’s their turn to enter an exhibit.

When you’re on holiday, time is precious and the last thing you want to do is wait in line. Mona Front of House Operations Manager Anthony White said the powerful queuing system allowed the influx of visitors to the museum in January to continue exploring and enjoying the museum rather than wait in physical queues.

The queuing technology not only improved the visitor experience during the peak summer period but also had an immense visual and operational impact on the museum, White said.

“Long queues are, of course, not enjoyable for patrons, but in the worst cases present major concerns for the logistics of operations when other artworks or infrastructure may be compromised by lack of physical queuing space,” White said.

“Where once our visitors spent considerable time in queues, particularly for experiential artworks that can only be engaged with by a limited number of visitors at one time, the queuing system within The O now enables visitors to continue exploring the museum whilst in virtual queues.

“This becomes particularly important during the busiest times of the year.” 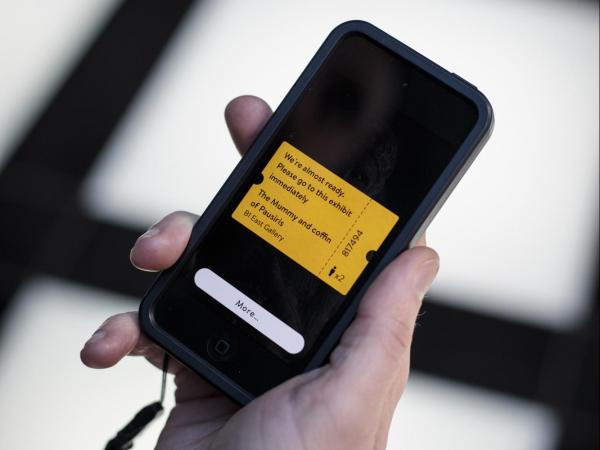 When Mona first opened to the public in 2011, visitors often had to wait in line up to an hour to view the Mummy and Coffin of Pausiris, a man who lived and died in Egypt some 2000 years ago.

In the lead up to the opening of James Turrell’s light installations at the museum in 2017, and knowing the popular American artist would likely pull large crowds, Art Processors set about removing the need for physical queues at the museum by moving them onto The O, allowing people to queue virtually.

The O plays a key role in the Mona experience, with the vast majority of visitors opting to use the app either on their iPhone or on a museum-owned iPod. In addition to letting visitors join exhibit queues virtually, The O has replaced traditional wall texts and labels — it can locate a visitor wherever they are in and around the museum and tell them about the work on display right in front of them.

White said the small number of visitors who didn’t use The O consisted of small children, the elderly, and the occasional visitor who preferred to engage with art without any information.

“Given that The O device is so integral to the Mona experience, we encourage all guests to obtain one before beginning their exploration of the gallery spaces,” he said.

“We now also encourage many of our visitors to utilise their own devices by downloading the app prior to arriving on site.”

Art Processors is undeniably a largely unseen driving force behind the unique Mona visitor experience, and not just for visitors — for staff, too. With more than 400,000 visitors exploring the 8,000 square metre museum site annually, Mona’s staff also rely on a staff-only area of The O, which provides up-to-date information about staff schedules, events, artworks and exhibits. 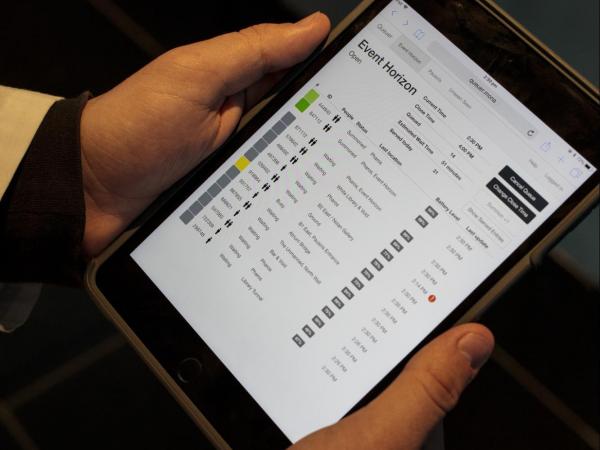 This digital platform plays a core role in the delivery of the personal customer experience available at Mona, with many features contributing to the day-to-day management of the museum. White said the ability to manage staff schedules using The O had been especially important during peak periods as staff rotated every hour throughout the museum each day.

“Their daily rotation is a complex and evolving document, which accommodates to up to 70 staff per day on occasions,” he said.

“As well as providing the framework for each of the staff’s daily movements, including their meal breaks, [The O] also details information regarding performances and events that may be happening on the wider site or in the museum.

“As changes are made throughout the day to any of this information, the latest version can be uploaded to The O so that staff across a large site can have the most up-to-date information at their fingertips by logging into the staff area of the device.”

The O also gives staff easy access to artwork information, which allows the museum’s supervisor and management teams to quickly report any incidents involving artwork. This reduces the need for front of house management to attend to artwork issues in person before reporting to the necessary technicians, saving considerable transport time across the large museum site.

“Being able to search by artist, or artwork or authors on The O is a useful tool for managers,” White said.

“With an ever-evolving collection on display, it is impossible to stay across every detail. To have the details of those works on display at the ready rather than needing to consult the traditional detailed collection management databases is a definite time saver.” 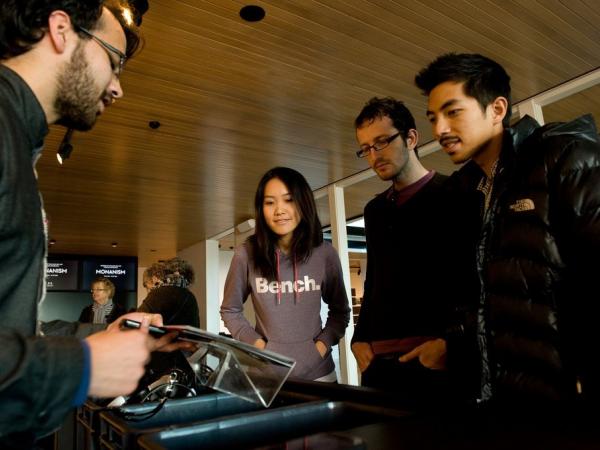 Art Processors has enjoyed a close, productive and innovative working relationship with Mona since its opening in 2011. The long-running partnership began in 2007 when MONA’s owner David Walsh sought a solution to two problems he was facing in creating the experience he wished for visitors: to enjoy the artwork in an aesthetically pleasing space, and to deliver rich content to each visitor in an individual manner without it distracting from the aforementioned aesthetics.

It was this challenge that led Art Processors to develop The O technologies in collaboration with the museum over a three-year period. Art Processors worked closely with Walsh and his team of exhibition designers, art directors, architects, and curators.

With more than 2 million users to date over an 8-year period, The O is well-tested, proven and, most critically, reliable. White said The O was an “incredibly stable technology”.

“[Art Processors’] timely responses and maintenance combine to create an unwavering, reliable and robust system that has avoided any considerable fault in the past 8 years of having been operational at Mona,” he said.

Art Processors and The O are at the core of delivering personal ownership over each visitor’s Mona experience, White said. Whether collaborating on the next improvement to The O or maintaining its daily operation, Mona and Art Processors’ working relationship is a close one that requires constant discussion, with responsive and decisive decision-making from both sides.

Related Reading: What Does A Virtual Queue Look Like?