Museums are increasingly working towards making the visitor experience more meaningful and positive. This is part of an ongoing effort to improve diversity and inclusivity and to also cater to those who find access challenging.

When 1 billion people — or 15% of the world’s population, according to the World Bank — experience some form of disability, the difficulties around universal accessibility in museums go beyond the scope of mobility limitations. For a person with a visual impairment, objects behind glass don’t make for a fulfilling museum visit. Someone with a hearing impairment might not get the full benefit from audio-visual displays, and a person with an intellectual disability may struggle with wall labels.

Improving access in museums involves using creative ideas to tackle physical and intellectual barriers that prevent people with a disability from taking advantage of cultural spaces. It also makes sure that the people you’re trying to reach are active participants in tackling these barriers.

We’ve worked with several institutions on projects designed to improve access, but today we want to share two projects in particular that demonstrate our digital capabilities and commitment in the field of accessibility.

Making The O accessible for the blind or vision impaired

In 2011 when The O was launched, it was built to support the accessibility features inherent in iOS, but it wasn’t perfect. Today, The O has some of the best accessibility features in the country for people who are blind or vision impaired and want to enjoy a museum experience, according to Vaughn Bennison, the Tasmanian branch coordinator for Blind Citizens Australia (BCA).

The first steps towards making The O and Mona accessible for the blind and vision impaired started last year when BCA approached Mona ahead of the organisation’s national convention, held in Hobart in March 2019. The group wanted to organise a guided tour of Mona for attendees but after conducting a “pre-tour” discovered they couldn’t use The O because it didn’t support VoiceOver.

VoiceOver is a screen reading technology built into Apple software that describes exactly what’s happening on your iPhone or iPod, including text, images, links, buttons and so on.

After providing feedback to Mona, museum staff were able to put together a tour for convention attendees that incorporated auditory and tactile elements.

Meanwhile, Art Processors set about reviewing The O’s accessibility and iOS developer Sebastian Beswick with guidance provided by Sina Bahram at Prime Access Consulting worked on overhauling the app to make it even more compatible with VoiceOver.

Example of accessibility features in The O. Images shows a small text overlay at the bottom of the screen, which shows the text that will be read out loud through the visitor’s headphones via VoiceOver. This text isn’t usually visible.

In June, Beswick met with Bennison and another BCA member at Mona to test The O’s accessibility updates. The trio spent about an hour exploring Mona with The O while Beswick noted their interactions with the app, their feedback, and any bugs they discovered.

Beswick said watching the pair interact with The O in situ was beneficial but also “magical”.

“Seeing someone using your app and not looking at the device in their hand. It feels like it should be impossible,” Beswick said.

Beswick said Bennison, who is blind, and his colleague, who is visually impaired, helped correct some of his assumptions around how the app should work for people who are blind and visually impaired.

“I’m a moderately proficient voiceover user but Vaughn was quite technically proficient.”

Bennison said the accessibility updates to The O were a big improvement compared to his previous visits to Mona. He said he looked forward to testing the latest updates to the app, which have incorporated his feedback, during a visit to the museum on International White Cane Day on 15 October.

“Mona was really receptive to making changes and working with us,” Bennison said.

“In my opinion, these updates put Mona at the forefront of accessibility when it comes to museum apps in Australia, and even around the world. There’s certainly nothing else that comes close in Australia,” Vaughn said.

“Accessibility Improvements, such as what Mona is doing with The O, really helps with bridging the gap for people who are blind or vision impaired.

“Setting aside my own personal views, to be included in a place like Mona, for a great many people it’s really quite amazing. Because visual art, to be able to use an app or device to get a good understanding as to the background of that art and what it looks like from an objective point of view, that’s amazing.”

Working with the Smithsonian on the institution’s most accessible app

The Smithsonian’s Freer Gallery of Art and the adjacent Arthur M. Sackler Gallery together house one of the most important collections of Asian art in the world. The Freer|Sackler buildings feature more than 40,000 objects ranging in time from the Neolithic to the present day.

In 2016, the institution began a two-year renovation of the Freer Gallery of Art. One of the major goals was to allow the museum’s director and curators to “reinvision how the collections are exhibited, how the museum’s narrative is told, and how it relates to a 21st-century audience.”

As part of this reinvisioning, we came on board to develop a new digital experience for the Freer|Sackler. Working closely with the institution’s staff, we created the award-winning Freer Thinking Audio App, a location-aware experience with a focus on accessibility and inclusivity.

The initial development of the app involved Art Processors’ Scott Brewer spending two days conducting presentations and workshops with Freer|Sackler staff to determine what we were going to build, but also to align stakeholders and identify key goals and required outcomes.

It was clear from the workshops that creating an inclusive digital experience that was available to all was a key motivator for the Freer|Sackler.

From the workshops, we compiled an extensive list of features the staff wanted to include in the digital experience. Ultimately, we chose to focus on four user groups:

We needed to make sure any features we developed didn’t exclude anyone from the user groups we had defined. So we took cues from Universal Design and developed a high-level decision tree, which focused on 4 key questions:

This framework (which you can download here) underscored ours and the Smithsonian’s commitment to achieving the highest standards in user experience, inclusive digital design, and accessibility. 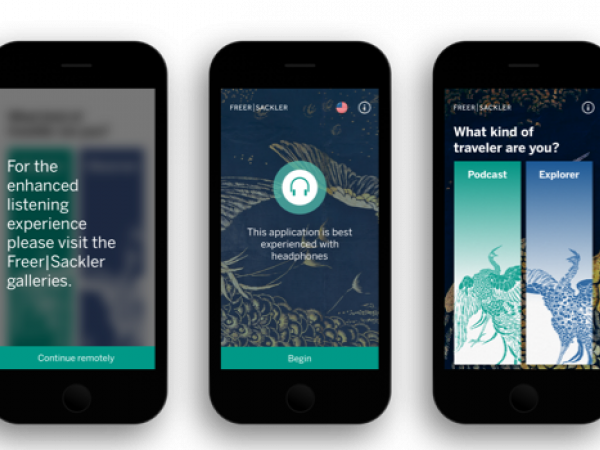 The resulting Freer Thinking Audio App is the Smithsonian’s most universally accessible app for people with disabilities and won an Honorable Mention 2018 MUSE Award in Mobile Applications.

The app offers visitors two ways to experience the institution’s collection: visitors can choose to wander at their leisure or follow a themed highlights tour. The experience is designed to cater to visitors based on the accessibility features enabled on their mobile device. It can be used with VoiceOver and provides transcripts for those who are hearing impaired.

To augment our existing experience in creating accessible apps, we partnered with Prime Access Consulting. Their team helped our developers understand how to take full advantage of the native accessibility features available in iOS.

Whenever possible, museums should reach out to the communities they’re hoping to welcome. The Smithsonian has a long history of making its galleries and exhibitions more accessible to people with disabilities, going back to the 1970s when a visually impaired employee at the Air and Space Museum developed a braille guide.

In 1989, an audit of accessibility led to the recommendation that the Smithsonian create an Office of Accessibility that would be part of central administration, embedding access at the heart of the organisation.

We worked closely with staff from this office who brought in accessibility experts to rigorously test the app in situ before the Freer Gallery’s reopening. 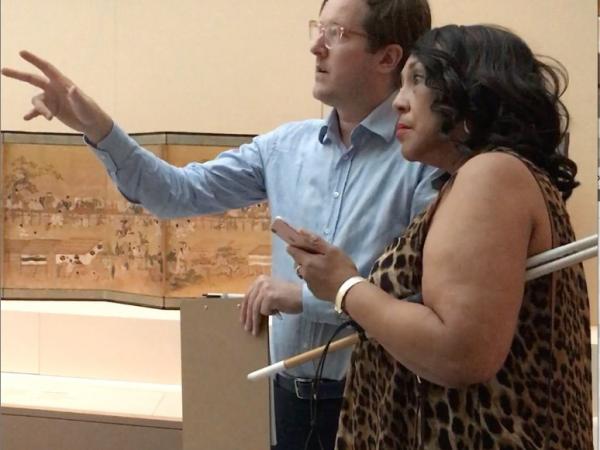 Pamela Murray (R), photographed during the user/expert testing of the Freer Thinking app in 2017.

“We had 8 people in total on site to test the audio app before it went live and that process was fantastic. It’s some of the best and most rewarding user testing I’ve ever been involved with,” Brewer said.

“The feedback that came back from the people who were involved, they were impressed with how the audio app worked from a technical perspective. But also watching how they interacted with the app and learning from that process; the extra elements they suggested for the content of the app; not just about making it technically accessible, but also contextually accessible.

“With some relatively minor fixes, we were able to increase the capabilities of the audio app to cater to a much broader audience.”

Accessibility is a conversation

Museums and cultural institutions provide safe, dynamic learning environments that contribute positively to the quality of life for individuals. But sometimes, spaces can be unwelcome and frustrating for people with a disability, imposing barriers to physical and intellectual access.

Accessibility shouldn’t be an afterthought or merely a matter of legal compliance; it’s an ever-changing conversation and one we’re actively involved in. When done right, it doesn’t just allow people to feel welcome, but makes room in museums for their voices.

It involves committing to a community that’s often overlooked, and in many cases, it’s about using thoughtful design together with new and existing technologies to provide access in ways that haven’t been available — or even thought of — before.