Bringing museums to the classroom with VR field trips

Kai Frazier is the founder of Curated x Kai, a tech startup that creates inclusive virtual reality field trips to museums for children in low-income communities. As a homeless teen, museums and other cultural places were beyond her reach. Later, as a history teacher, she saw her students were missing out on the same enrichment opportunities.

On Christmas Day, 2017, she filmed her first VR video at the Martin Luther King, Jr. Memorial in Washington D.C. Since then, she has sent more than 3,000 students on VR field trips.

“A lot of my students’ parents worked all day, three jobs, so it was really hard to get permission slips signed.

“At an early age, kids see new careers, new opportunities, new ideas, new worlds, and their aspirations can change overnight. But if kids aren’t exposed to these powerful opportunities, they fall victim to their own circumstances.”

According to a U.S. Travel Association study, regardless of gender, ethnicity or socioeconomic status, youth who take educational trips have better grades (59 per cent), are more likely to graduate from high school (95 per cent) and college (63 per cent), and greater income (12 per cent higher annually).

In fact, 89 per cent of people who took part in the study said educational trips had a positive, lasting impact on their education and career because the trips made them more engaged, intellectually curious and interested in and out of school.

While most museums regularly welcome school groups through their doors, Frazier said people often mistook “access with proximity.” Not long after launching Curated x Kai, she returned to her former school to take her students to the Martin Luther King, Jr. Memorial as part of a VR experience. They didn’t know the memorial was nearby.

“And it was right next to them, just 30 minutes away,” Frazier said. 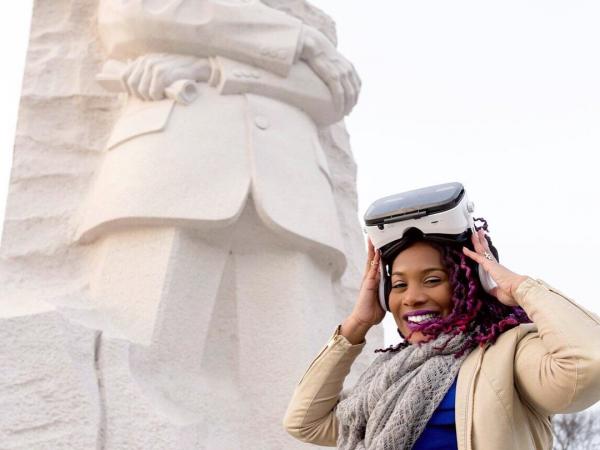 Frazier has experienced her fair share of misfortune — and kindness. As a senior in high school, she found herself homeless. At the time, college wasn’t an option. But she was fortunate enough to have the support of a few incredible teachers who helped her make ends meet so she could graduate, putting her on a path to college and a history degree.

For 15 years, she worked as a teacher in low-income areas where students didn’t have books or computers, but they did have smartphones. She incorporated technology into her classroom and filled her students’ social media feeds with educational activities. Later, she worked in history museums, and it was at the United States Holocaust Memorial Museum where she experienced VR for the first time.

There were two exhibitions, in particular, that struck a chord with her: For My Son, a VR film that allowed museum visitors to experience the journey of Firas, a 27-year-old Syrian refugee; and The Portal, an installation that enabled visitors to have real-time conversations with people in refugee camps.

“When you walked inside The Portal, you could talk to someone who had escaped genocidal crime or a mass atrocity. Visitors would be afraid to walk in, they thought they were going to see some ravaged place, there was just so much fear just walking in,” Frazier said.

“Due to time zones, The Portal would change in the afternoon to a refugee camp in Jordan. So, the same thing, people would be afraid to walk in and then they would see these kids who would want to know, what’s snow like? Have you been to Disney World? They just wanted to talk to somebody.

“That was my first exposure to big tech and VR, and how, when done correctly, it can really connect people in ways you don’t really think about. It gave me the courage to start my company.” 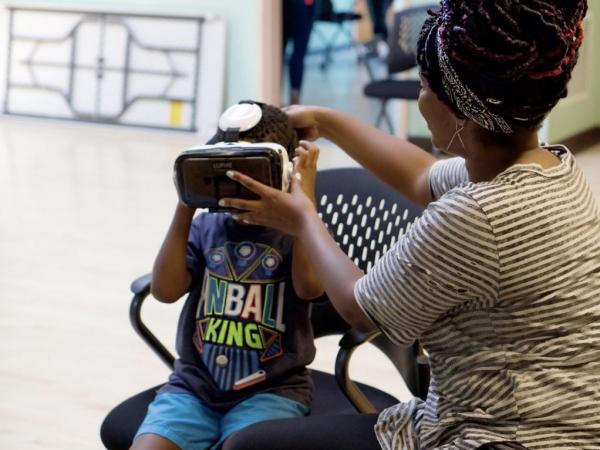 After hashtagging an image she had taken at the museum on Instagram (“I think it was #vr or #virtualreality”), Frazier received a direct message from someone at Georgetown University, who invited her to visit the institution’s Makers Hub. There, she held her first VR camera. Two days later, she launched her company, Curated x Kai.

Curated x Kai creates curriculum-based, inclusive VR field trips, allowing students to explore the world around them and “see” the places they learn about in classrooms. The field trips are designed to be fully immersive, but they also don’t need complex equipment. Students can view them using a smartphone and a simple cardboard or hard plastic VR headset. Even without a VR headset, students can watch the 360˚ videos on a laptop, or projected in front of a whole classroom.

Available field trips include tours of the Martin Luther King, Jnr. Memorial, the official Obama portraits at the Smithsonian, and the White House. The VR field trips allow students to journey to places on the other side of the world, such as war-torn Syria, Lascaux Cave in France, and Valen’s Reef in Indonesia. Students can also learn about subjects closer to home, such as the American Civil Wa and Hurricane Maria.

The field trips make it possible for students to experience museums and other cultural places beyond their physical reach, exposing children to new ideas, sparking their curiosity, and fueling conversations in classrooms.

Frazier said accessibility and inclusion in education — and in the museum sector — should be a priority and not an afterthought, and VR provided an innovative way for museums to embrace new and diverse audiences.

“When I pull out a headset, kids are like OMG, can I hold it? They don’t know what is it and haven’t seen one before. When you see videos of the kids using the headsets, you see their faces, their mouth wide open because they’ve never experienced anything like it,” Frazier said.

“I recently had an experience with a boy who didn’t know what an asteroid was. He watched our VR field trip about asteroids and when he took the headset off, the words coming out of his mouth, he was like a Wikipedia page. I thought he was joking, maybe he had heard about asteroid before. But he hadn’t. That gave me chills.

“I’m not using any digital tactics to get these kids interested, I’m just showing up. I believe that when you give kids opportunities, they can do great things.”

Curated x Kai will also soon start filming a VR field trip about the gene editing technology CRISPR, taking students to where history is happening at the University of California, Berkeley.

It will be one of 15 new VR experiences the company will be launching this year.

As a qualified historian who worked at museums for many years, Frazier would like to film more of her field trips at museums. She said institutions were increasingly embracing VR, integrating virtual experiences into their exhibits. But she said VR presented rich opportunities for off-site experiences and educational outreach that could help museums take their collections to diverse audiences for meaningful and inclusive experiences.

“The unfortunate thing is there’s a lot of talk about why museums are becoming less relevant, but it’s going to take outreach to these schools, and some unconventional methods, to keep museums relevant,” Frazier said.

“I’m delivering a digital tactic that works. Kids who don’t even realise that museums exist, with VR they could know more about these places. So what I’m saying to museums is, they have educational outreach goals, they have education departments. VR can help with their outreach.” 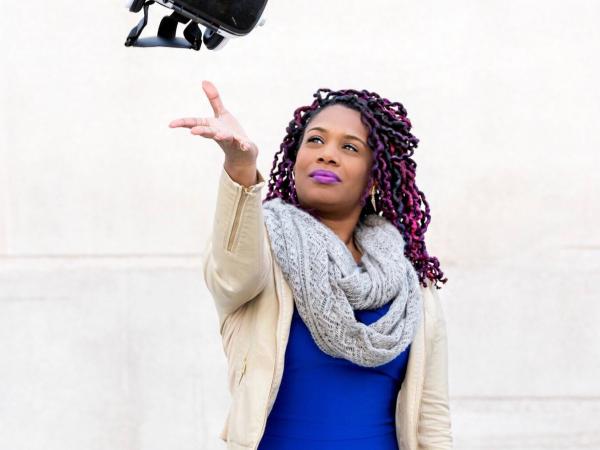 Over the next 12 months, Curated x Kai recently will be working with not-for-profit tech company Mozilla to develop low-cost, all-in-one headsets for classroom use. Teachers and educators wanted VR in their classrooms, and her partnership with Mozilla was proof of this, Frazier said.

“A teacher in St Louis saw an article about my work and sent it to his son who works at Mozilla. I ended up on a conference call with top engineers there who wanted my insights — they wanted to tighten up their feedback loop and I had the classroom insights they were missing,” Frazier said.

“And this was all because of a teacher who saw what I could do in his classroom and said to his son, ‘you have to help her’.”

Frazier recently joined the Board of Directors for the Museum Computer Network and plans to use her role to “voice the opinions and viewpoints of people who can’t be at the table.”

“Sometimes, I don’t understand Silicon Valley and how my company is growing, and then I’ll go into a room full of engineers and say something about how the headsets should work in a classroom, and they’re like, ‘Woah…’” she said.

“A lot of people want to make changes and they think they have to do something crazy or make a big gesture, but really, sometimes just speaking is revolutionary.”

Next week, Frazier’s work will feature in Art Processors’ Wided Khadraoui presentation at MW19, the 23rd annual MuseWeb conference, in Boston. The presentation will be on Inclusivity Practices & the Real Role of Technology in Art Museums, about genuine inclusion and the role technology has in that process