Australian First Nations belongings from one of the world’s most important anthropological collections have been “awakened” through 3D digitisation, spatial audio, AR and VR.

Australian First Nations belongings from one of the world’s most important anthropological collections have been “awakened” through 3D digitisation, spatial audio, AR and VR.

Last year, in close collaboration with Museums Victoria, the Faculty of Arts at the University of Melbourne, and Arnhem Land, Cape York and Pintupi First Nations communities, Art Processors had the privilege of “awakening” 200 belongings from the Donald Thomson Collection.

From the first time he set out for Cape York Peninsula, anthropologist Donald Thomson captured life in diverse Aboriginal communities across Australia with a natural curiosity, securing his place as one of the 20th century’s foremost anthropologists.

Over the course of his 50-year career, Thomson collected thousands of First Nations belongings while living in remote communities, across Cape York, Arnhem Land and the Western and Central Deserts.

For the Awaken exhibition, we developed an accessible technological solution for the presentation of the belongings through the use of 3D digitisation, spatial audio, and augmented and virtual reality — our goal being to “unlock” the belongings from the cabinets they were stored in.

Working together with organisations like the The Mulka Project, we were able to put 360º cameras into the hands of people in remote communities, enabling them to share  their stories and connections to country, and encourage communication and knowledge flows between Indigenous and non-Indigenous Australians.

For over 80 years, the enormous breadth of material sourced during Thomson’s immersion with the First Nations people of Arnhem Land, Central and Western Deserts, and Cape York Peninsula lay largely dormant in storage.

Thomson’s ethnohistory collection is significant — it’s included in the UNESCO Australian Memory of the World register and spans anthropology and botany, through to zoology and studies of Aboriginal ecology, presenting rich, multi-faceted insights into their living culture.

Our work was to “awaken” and activate the experience of belongings from the collection in relation to their present dislocation with Country, with the goal of restoring part of the context of production and  connections to community knowledge carried through generations of First Nations people to the present day.

Working in direct collaboration with Melbourne Museum curator Rosemary Wrench (who was the principal consultant for the film Ten Canoes (2016)), The Mulka Project, Southern Kaantju woman and University of Melbourne Faculty of Arts graduate Shonae Hobson and other community representatives, there was a common resolve from all involved to explore and redefine the enduring traces of the belongings from the Donald Thomson Collection.

“Thomson Time” and beyond

Thomson was a remarkable ethnologist best remembered for his commitment to the Yolngu and Pintupi people as both a researcher and land rights activist, living in country with Aboriginal communities between 1928-1963.

From his own immersion and experience of the land, we were inspired to think about a contemporary treatment of the belongings from the collection that would take in ideas of “object-based learning” while creating new opportunities for dialogue. 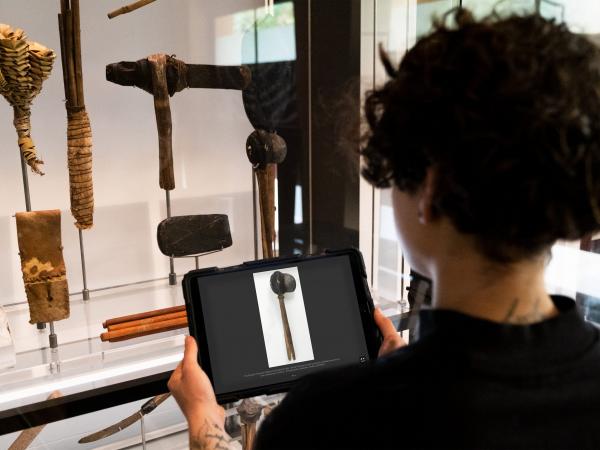 Awaken, then, was an opportunity to go beyond didactic presentation and do some deeper thinking about the personal stories, processes and knowledge around the Donald Thomson Collection. Genevieve Greeves, Exhibition Curator, Worimi Nation film-maker and Melbourne Museum Director of First Peoples, had an overarching vision for Awaken that focused on inclusion and communication. The exhibition provided an opportunity not simply to look back with fixed perspectives, but also forwards to future outcomes, to opening up new conversations.

Working closely with Yolngu, Cape York and Pintupi communities, we quickly became aware of the unique personal links to the belongings as generational landmarks and vessels for passing on the First Nations knowledge embedded in their creation. With this in mind, the focus of the exhibition leaned towards the generation of new perspectives and insights while reclaiming the past; this element becoming an important rationale for the 3D digitisation process.

For the 3D digitisation process, we worked with the University of Melbourne Digitisation Centre, Digital Studio and NExT Lab to explore various approaches to scanning on-site at Museums Victoria’s  collection store. This process included trials of structured light scanning with blue lasers and photogrammetry techniques to capture the form of the objects and their surface.

Over the course of several weeks, we iterated on the workflow needed to produce high-resolution 3D meshes (20M polygon count), physically based rendering (PBR) materials and textures for the belongings’ virtual presentation. 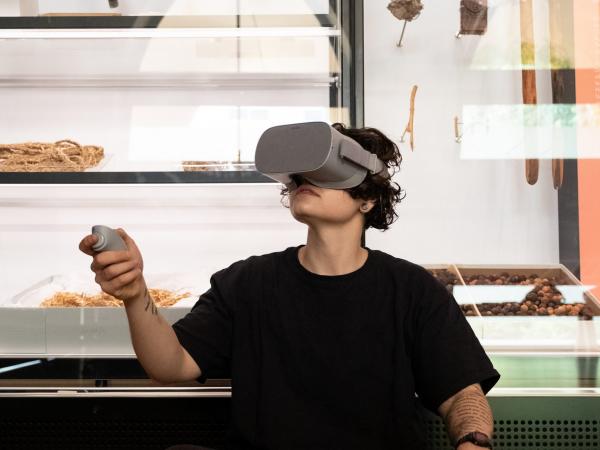 In addition to this object scanning, representatives from The Mulka Project were instrumental in contributing stereoscopic 5K location filming around Arnhem Land. Their filming showed the wild variations in landscape from the verdant “mayang”, or inland rivers, through to desolate sandy beaches.

For the other communities without their own equipment, Art Processors provided Ricoh Theta 360° cameras, tripods and spatial microphones, together with hands-on training to facilitate the capturing of content. Multi-directional microphones, which were attached to the camera setups, enabled field recordings of the original location ambience in 3D as first order ambisonics.

When processed inside of a real-time game engine and then played back through the two-channel binaural output, we were able to recreate an experience of the sound as heard on-location, responsive to head angle and rotation, presenting the rich aural texture of water, wind and wildlife specific to those regional ecologies. 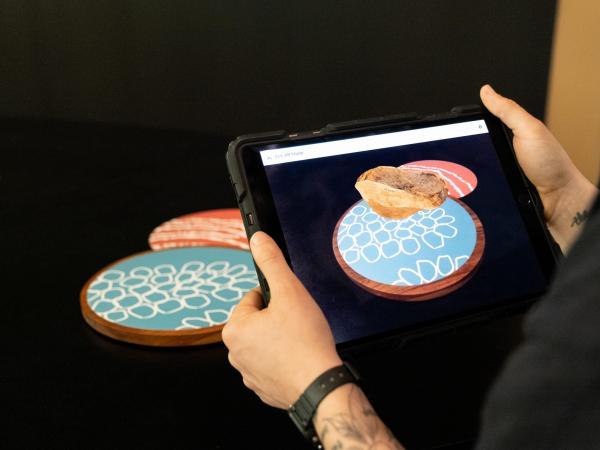 Using the captured video, we were able to “re-place” the belongings from the collection back into country related to where Thomson originally collected them, which for us was an important technical achievement. From taking the lighting conditions captured in the environmental maps and filtering them through PBR materials (for physically-based rendering) you get a sense of the land illuminating and interacting with these dormant belongings for the first time in a century.

For the exhibition’s digital labels, we felt it was important to give some context to the practical use and function of the belongings, including the materials used in their construction and First Nations knowledge of the natural environment. The Oculus Go VR headset provided the means for transporting visitors to distant and often inaccessible areas in the Northern Territory and Queensland.

Through the deployment of XR technologies, we were able to deliver a seamless experience centered firmly on the objects at hand, while at the same time revealing more about the collection than traditional fixed label interpretation. This approach took inspiration from the Faculty of Arts’ vision to embed object-based learning into the Arts West building and provide an interactive and embodied form of enquiry from first-hand experience.

To complement the experience of going inside the VR environments, we also made use of AR Kit and augmented reality to “unlock” the digital surrogates from behind the glass cabinets the belongings are displayed in and onto a large communal table with AR object markers in the middle of the room. The table’s circular configuration helps to encourage group interaction and discussion as people gather around for a shared experience of the digital labels.

These tangible object markers — with the 2D feature tracking — enabled hands-on physical interaction with the 3D models that were projected onto them. This tapped into the natural affordance of working with your hands, allowing people from the communities and exhibition visitors to pick up the digital surrogates as seen through the AR frame.

This approach has been a great success and highlights the kind of seamless, open-ended user experiences that technology can provide when we are able to provide “as little design as possible“ — and are willing to trust an audience’s instinct for discovery and exploration.

In lieu of static wall labels inside of the display cabinets, the design of the digital labels also encourages visitors to engage with the physical objects on display. This prioritises the immediacy and wonder of engaging with the belongings in the Donald Thomson Collection before encountering secondary sources of information on 10” iPad Pro tablets. The tablets serve as portable guides, delivering a breadth of rich information, and drilling down into extended descriptions, additional curator’s notes, and other media.

We are proud to have been involved in the development of the Awaken exhibition. This opportunity to explore new and innovative ideas around 3D scanning and digital labels, and using them to enhance the museum visitor experience, was largely thanks to the courage and vision from our institutional partners in their forward-thinking approach to the exhibition design.

The project was perhaps one of the most complex we’ve worked on in terms of the collaborative nature of the project, which involved multiple stakeholders, Aboriginal community elders and representatives from Aboriginal groups and communities who were often in remote areas of Australia and at vast distance.

The overwhelmingly positive feedback from First Nations communities — their excitement and interest in adopting the technologies we employed in developing our accessible technological solution for the exhibition, as well as the delight of visitors — has validated our digital approach.

It was also humbling to collaborate and assist in opening up the process of curating immersive content for Awaken directly with First Nations communities so their generational knowledge could be included, while also providing an important opportunity to surface new perspectives and untold stories. 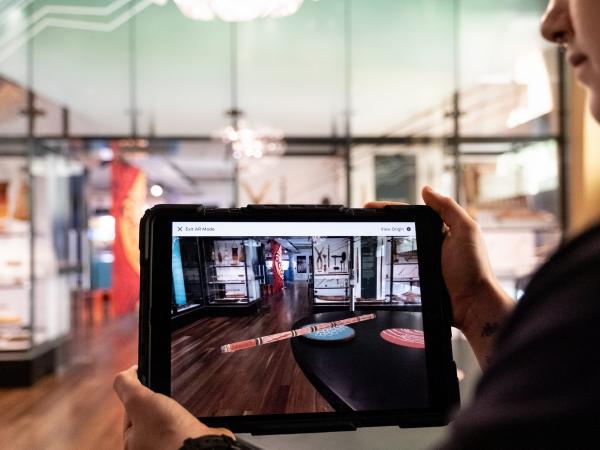 Through the various group consultations, it became apparent that while Thomson was a friend of First Nations people, they wished for many of the belongings he collected to be brought home. Perhaps there is a role for both real and virtual belongings to play in a return, providing a link between past and present and to maintain connections vital to these communities’ continuing story and identity. This is an ongoing conversation, and one we encourage.

Donald Thomson was one of the first filmmakers to shoot 16 mm colour film in Australia and the use of cutting edge technology for Awaken was inspired by his experiences, immersion and connection with the land.

Sometimes the novel elements of technology can become the focus, and resonances with the original object and cultural relevance are overshadowed. For developers and technologists, it’s a risk that comes with being deep in the technical execution of a project. However, for Awaken there were many generous and passionate people involved from all over Australia who were able to come together, despite vast distances, to contribute their skills and knowledge. It was humbling to be part of this experience, and this exchange and ongoing dialogue has helped ensure that original goals for the exhibition are realised.

Many thanks to the University of Melbourne’s Faculty of Arts and Chancellery Engagement teams, Museums Victoria, and representatives of the communities of origin for your time, care and prodigious efforts.

The Awaken exhibition is open to the public daily from 10am – 4pm at the Arts West Gallery at the University of Melbourne Faculty of Arts until the end of 2020. We continue to work with the Aboriginal communities to add new stories and content in response to the object-based learning in the exhibition space.